by Frisco d'Anconia
in Crypto Analysis
Reading Time: 2 mins read
A A
0 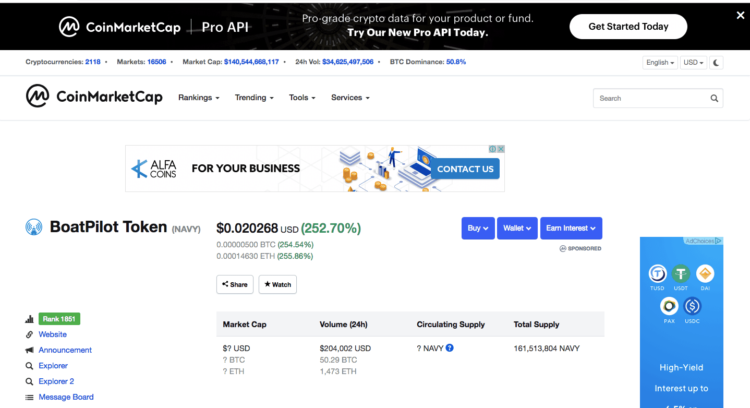 Barely two days after CoinMarketCap Listing, BoatPilot Token (NAVY) is making waves in the Crypto Space. On Friday the Yachting Navigation Blockchain soared 252.70 percent to the admiration of many.

The marine Google Maps and TripAdvisor in one software attributes its early success to a couple of developments. In a chat with Ivan Smirnov, Marketing Manager at BoatPilot, he credited the growth to media exposure, CoinMarketCap listing among others.

“The main reason for NAVY’s rapid growth is that it was listed on CoinMarketCap recently. Another reason is media traction: CoinTelegraph posted an article about BoatPilot. Our trade volumes on available exchanges increased drastically, and in April-May, we are preparing another exciting piece of news, but we can’t disclose this yet!”

Community Is In Cloud Nine

Naturally, such phenomenal growth creates excitement across every Crypto community since it is a windfall for members. CWS delved into how the community responded to the tremendous jump.

Notwithstanding, he urged the first half of the community not to worry since a new update of the navigation app is coming and it’s going to be huge for them.

The Marketing Manager was very positive that the platform can maintain the gains and take it to the next level. He revealed that as it is pointed out in their whitepaper, there are plans to buy out tokens from exchanges to maintain the project’s ecosystem.

Smirnov further illustrated that bought out tokens will be used to reward users for the geodata they upload. “More than that, we burn some portion of the tokens we purchased (about 25%) to decrease the offer, and increase demand. It naturally, causes the NAVY price to go up, we believe it’s only just the beginning,” he held.