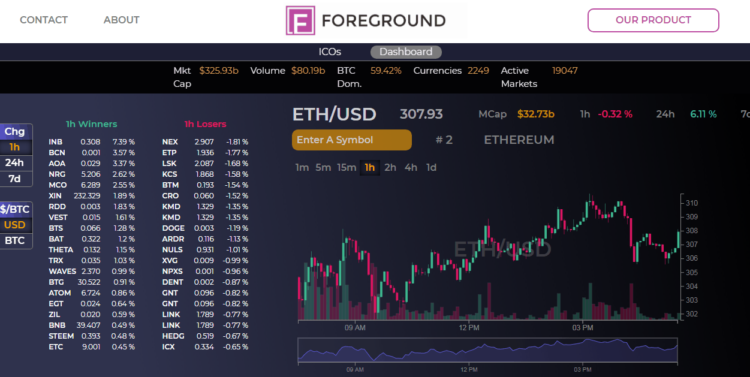 [tds_warning]This ICO Ended . This ICO Is Dead . Do Not Try To Invest [/tds_warning]

Foreground is a product that revolutionizes the way affiliate marketing done. It connects advertisers and publishers on both the traditional Internet and the rapidly growing decentralized web (Web 3.0). If you’re running an ICO or selling goods for cryptocurrency, Foreground provides you an instant affiliate campaign with only 3 lines of code.

Foreground is the only affiliate marketing and advertising solution that connects advertisers and publishers on both the traditional Internet and the rapidly growing decentralized web.
Foreground solves numerous problems in the affiliate marketing industry by making marketing simpler, cheaper, more transparent, and providing a novel way for advertisers and publishers to build reputations based on an immutable ledger of verifiable conversion data. vision involves building a product that positively impacts the industry.

Advertisers spend nearly seven billion dollars on affiliate marketing every year, but almost 40 percent of that spend never makes it publishers. The cause of this is market controlled by middle men whose incentives aren’t aligned with the interests of publishers’ and advertisers’. Networks and service providers capture too much spend, leaving advertisers struggling to see a return on their affiliate programs and publishers struggling to convert their traffic into earnings.

The Foreground team chose to use blockchain technology because it allows for the creation of promotions and advertisements as natively digital assets that can be safely modified by many parties without the need for a complex permission system. The blockchain’s
immutability ensure that Foreground can build an incontestable history of paid conversions, which serves as a basis for the network’s reputation system. Robust fault tolerance and native tokens for payment were also important considerations.

Advertisers running an affiliate program can generally do by using either affiliate network or an affiliate software platform. Affiliate networks build twosided markets of advertisers and publishers that are valuable because their network effect. Affiliate software platforms, on the other hand, are sold businessto-advertiser and attempt to provide advertisers with the tooling they need to manage their own affiliate programs. A list of major players is below. This list is incomplete and for reference only.

Quote This article is writing on 22 June 2019 based on information available online & news portal. If you feel it’s outdated or incorrect, please write here to update it. Mail us: support@coinworldstory.com Or Whatsapp Us- +13098896258

Not all the websites Whi listed in Top List are 100% safe to use or investment. We do not promote any of those. Due diligence is your own responsibility. You should never make an investment in an online program with money you aren’t prepared to lose. Make sure to research the website. So Please take care of your investments. and be on the safe site and avoid much losing online.